Residential property below R2m is the hottest investment asset right now. We look at what’s on offer and where

or the first time in almost a decade, agents are reporting a spike in enquiries and sales in many areas as record low interest rates and lower prices drive the first-time buyers’ market.

According to Lightstone, Cape Town has seen the highest number of these buyers investing in the R1,5m to R3m price band, compared to the other metros where the most activity is being seen in the R700,000 to R1m band. By the end of October last year, 189 freehold homes and 40 sectional title units had already been registered.

“Many of these buyers are looking for freestanding family homes and are often viewing higher priced properties than they would normally look at in the hope that sellers will accept high discounts,” says Arnold Maritz, co-principal, Lew Geffen Sotheby’s International Realty in Cape Town’s Southern Suburbs.

The agency’s sectional title specialist for the area, Dave Burger, says during lockdown he received 30% more enquiries for flats in Mowbray and Rosebank where beautifully renovated one‑bedroom apartments can be found under R1m.

“Since the start of level 4 restrictions, I’ve actually had an increase in buyer enquiries, especially from first-time buyers and investor purchasers anticipating a spike in student rental demand,” he says.

Wellington in the Winelands is enjoying a surge of market activity at entry to mid-level. Chris Cilliers, CEO and co-principal, Lew Geffen Sotheby’s International Realty in the Winelands, says, “Despite Covid-19, the sale price increased to R1,55m with sectional title median prices also increasing in 2020 from R680,000 to R778,000.”

Richard Day, CEO of fixed-fee agency Eazi Real Estate, says, “In Cape Town’s South Eastern Suburbs and surrounds, including Grassy Park, Gilray and Belhar, several buyers are competing for the same properties, in some instances resulting in a higher‑than-asking price being achieved. In October our median time to sell was just 11 days.”

He notes high demand for freehold properties below the R2,5m mark among those seeking a change in lifestyle or more space for families as well as extended families buying together. Mature buyers are also looking for smaller, low‑maintenance properties.

“With dual living increasingly popular, properties with a flatlet for additional income or to provide space for adult children (university students or young professionals) or elderly parents, are sought after. Generally, we find that our sellers are prompted mainly by changing lifestyle needs rather than financial constraints, and are scaling up or down accordingly,” says Day.

“Owner-occupiers are happy to settle for smaller but newly constructed units with the peace of mind that comes with safety and convenience. And property investors spot the potential for asset appreciation in well-located sectional title schemes, especially if they can secure units in the first phase of the development period under the R2m mark,” he says.

Bellville has a family-orientated culture, with buyers seeking secure living with amenities close to home.

“Devmark Property Group took the initiative to support this community, which has long cried out for a good-quality sectional title scheme. Our product caters to those who wish to work and play close to their families and provide safe, affordable homes for those seeking independence,” he adds.

Still in the Cape Town area, Rabie’s Bow Tie arrangement of stylish apartments and townhouses attracts purchasers who want to be at the forefront of modern home design and innovation. It’s location in Burgundy Estate, with Milnerton and Blouberg beaches to the west and the winelands of Durbanville Hills to the north, is just one USP (unique selling proposition).

Green building principles, smart design, high-speed fibre, and verdant landscaping add to the attraction. Apartments with open‑plan hosting areas are selling from R845,000 and three‑bedroom townhouses with private gardens are selling for R1,88m. 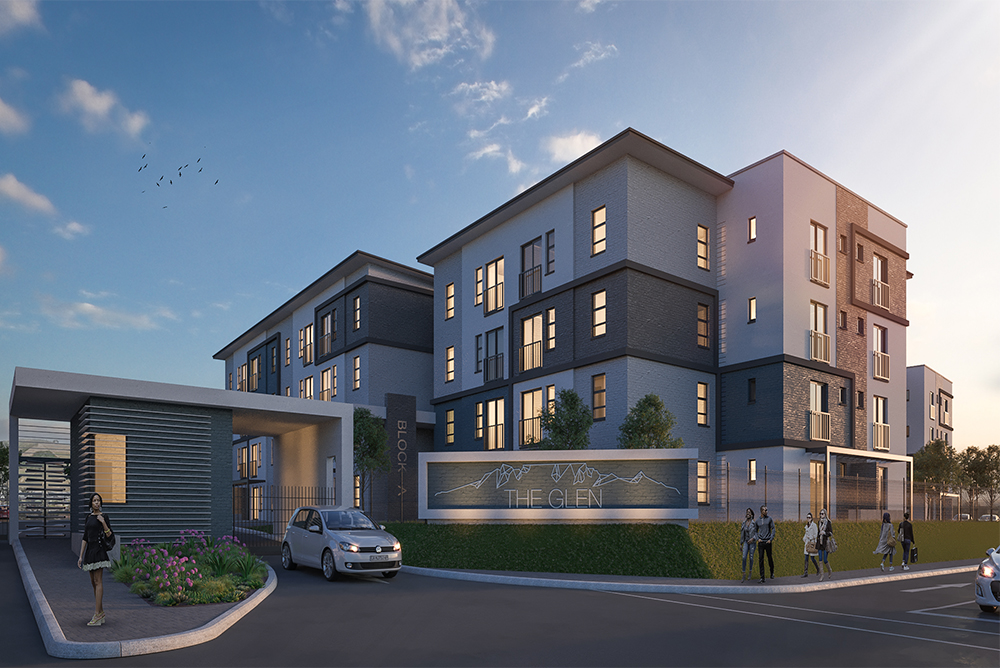 The Glenhaven sectional title development is by Devmark

Along with enthusiastic buyers, Balwin Properties is celebrating unprecedented sales at Wedgewood Sandton, a lifestyle development offering studio, one‑ and two-bedroom apartments. Racking up R1bn sales in seven weeks since November last year, there will be appealing purchasing opportunities here until the final apartments are sold.

“Balwin is renowned for our fast rate of sales but this exceeds anything we’ve achieved to date. This is a massive positive for this country and the property market as a whole,” says Steve Brookes, CEO, Balwin Properties, South Africa’s largest residential developer.

The project’s success is notched up to the ideal combination of product, price, location, low interest rates and low deposit. Apartments start from R850,000, including bond and transfer costs.

In Boksburg, Balwin is now selling super secure, ultra-modern apartments from R499,900 for a one-bedroom and R699,900 for a two-bedroom at Greenpark Lifestyle Estate.

And in Tshwane, they’re launching Mooikloof Eco Estate, which comprises upmarket apartments and a net-zero, six-star rated, Edge-certified green lifestyle centre with a fully equipped gym, a communal swimming pool and restaurant, among others. The options range from one‑bedroom, one-bathroom apartments at R799,900 to three‑bedroom, two-bathroom homes from R1,69m. There are no bond and transfer costs here either.

The Amdec Group has announced the development of a R500m affordable housing estate of 1,000 apartments in Ottery, Cape Town.

The group is applying its experience in delivering high‑end residential estate living to providing housing for lower‑income citizens. Their philosophy is to create a sense of community among residents with greater consideration of lifestyle benefits.

Golden Grove Estate will include a convenience retail centre and onsite laundry; communal gardens and a children’s playground; creche, day care and after care or supervised homework facilities; an onsite furniture workshop so that residents can build or assemble their own flat-pack furniture on site; five-a-side soccer pitches and basketball courts, and a communal recreational clubhouse for residents. 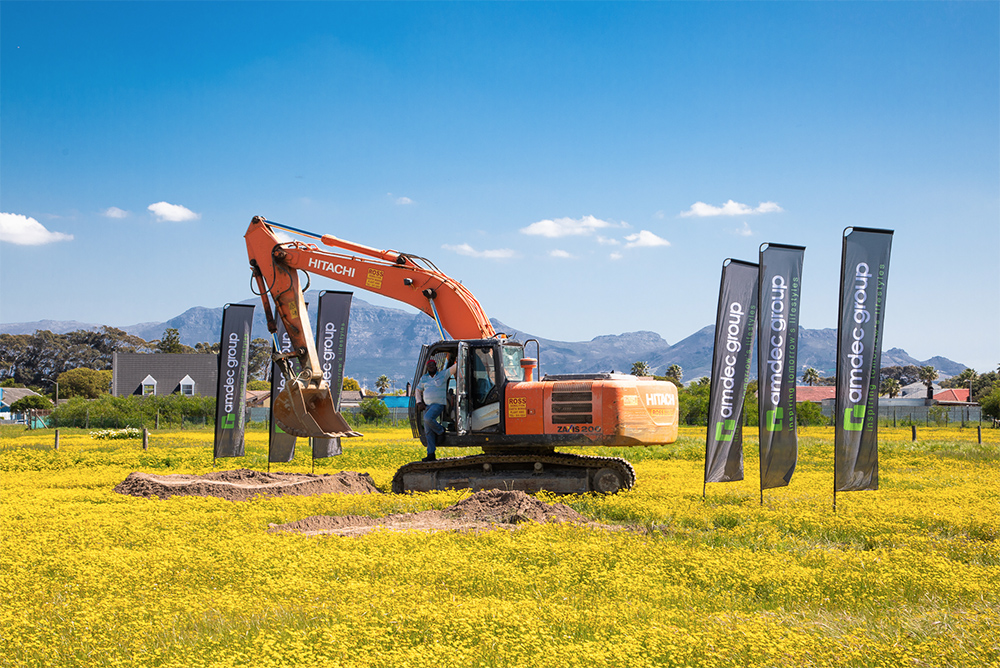 The site of Amdec’s Golden Grove housing development in Ottery 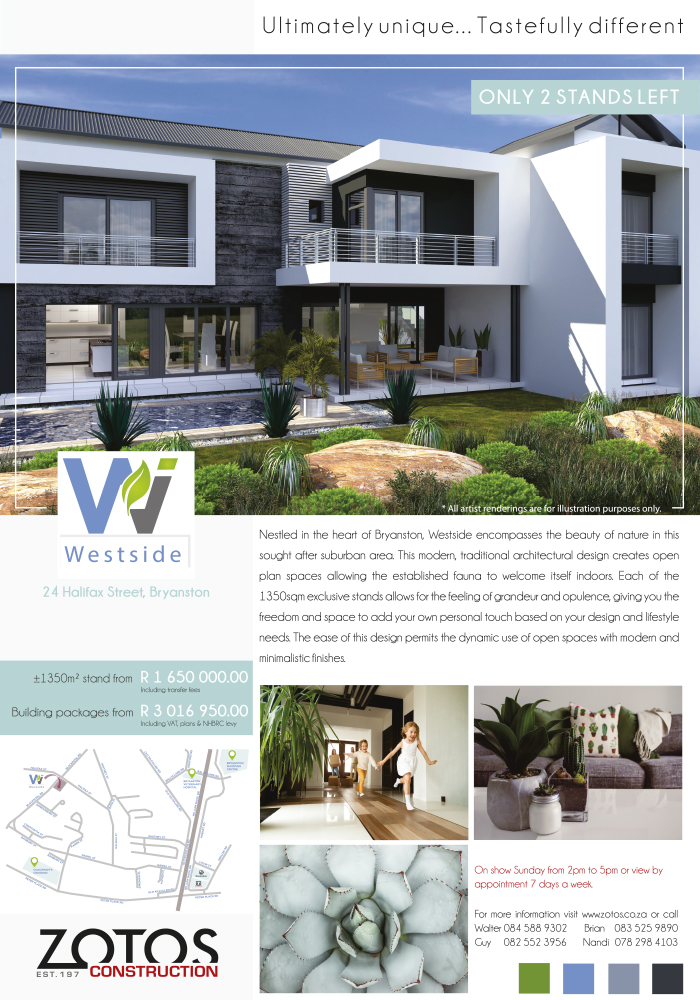 Get rental rates right in 202124 January