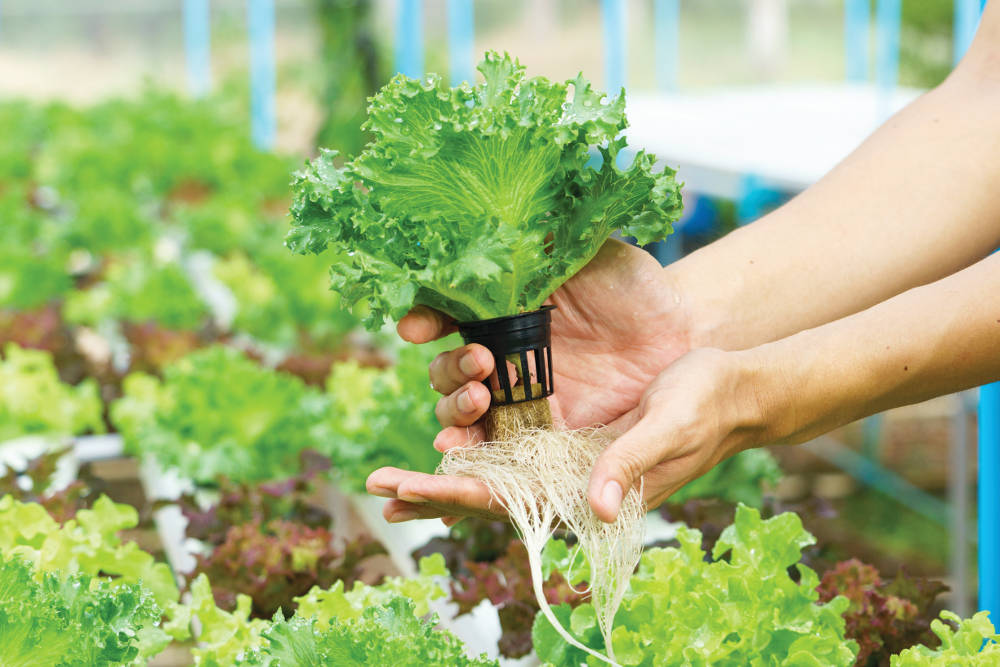 There are so many reasons why we should be growing our own veg, and no excuses any more as to why we can’t. Take Urban Organics’s system – it works best in confined spaces, so balconies, patios, back gardens or even blank walls are ideal.

Aaron and Jeff Cullis are Urban Organics. Their goal is to implement a hydroponic system into as many schools as humanly possible, while simultaneously educating children on the importance of farming, and how easy it is. Aaron says, “I was never a green-thumb, but mastered hydroponics in under a few months. Anybody can succeed.” He adds, “Hydroponics is an ancient method… think about the Hanging Gardens of Babylon, or even the Aztecs’ Chinampas which were floating gardens.”

First and foremost, the Urban Organics method uses 90% to 95% less water than any other method. So, drought or no drought, water isn’t an issue. This saving is made possible because of the constant circulation of the same water – you can use tap water, borehole water or even rain water.

Aaron explains its principles, “Hydroponics is the art of growing plants without soil. Plants don’t need soil and natural light to grow. Soil is a growing medium that serves as a ‘middle man’ to successfully pass water and food minerals to the plant’s roots, and to keep the plant stable and upright. By supplying plant roots with an unlimited source of the same recycled water repeatedly – and by adding a plant nutrient to the water – the plant has all it needs to grow,” he says.

What about light? “Because of lighting technology, the sun’s spectrum has been imitated as a light bulb/LED, and can be used indoors for plants to grow successfully in a dark room. This gives the grower the advantage of growing any crop all year round, regardless of the season. This is made possible by controlling the climate indoors and by supplying it with the ever popular ‘grow light’.”

The Cullis couple spent four years experimenting and testing their method, so as to create the perfect domestic or residential system. “Our systems are NFT (nutrient film technique), which is one of the main methods of hydroculture. In a nutshell, it means water flows around a system 24/7 (with the added nutrient) to a main tank which houses a submersible pump that supplies the system with that same nutrient water, over and over.”

How to get started

You’ll need a 220v plug point, and a water source. Once the system is in circulation, all you need is to plant seedlings in a net pot, add their specially-formulated nutrient and just wait for your plants to grow! You need to check water levels in the tank every two to three days; add nutrient to the tank once a week; and check plants five minutes a day to ensure they’re all looking healthy.

Is South Africa lagging behind?

“Countries like America have implemented hydroponics in schools countrywide to educate children on the importance of being able to grow your own food, as well as identifying plants successfully,” says Aaron. “Over one million American households have some form of hydroculture or permaculture in their back yards to self-provide. Populated Asian countries have implemented hydroponics on a large scale as land is hard to come by, and dense city residents are forced to have roof gardens which supply households and families within.”

There’s no better time than now to implement hydroponics in South Africa – our water security is at risk, poverty is on the rise, and… growing your own veg is very satisfying and even fun. It’s an important lesson for children, too. “Hydroponics and aquaponics have to be the future of growing,” says Aaron.