Property focus: Out with the old 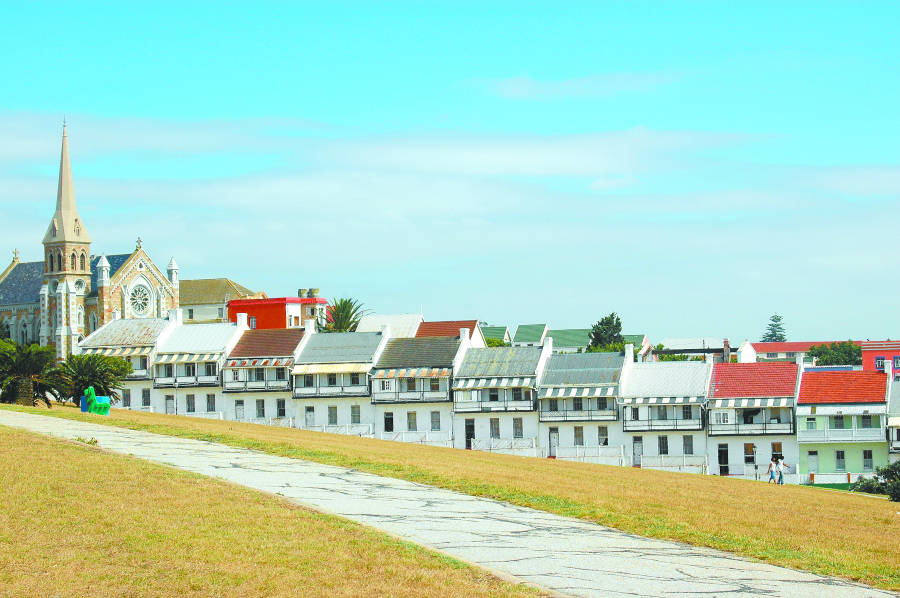 Characterless new buildings rise up all the time when there are many promising but perhaps neglected historical spaces that could – with courage and vision – be renovated and repurposed.

Three Port Elizabeth buildings in the Central and the Baakens River valley areas have, thanks to the fearless “bigger picture” vision of owners or developers, been transformed into fine testaments to creativity and collaboration.

Chicky’s Yard in the Baakens River valley is an inspiring example of a historical industrial space reimagined to incorporate a diverse and trendy tenant mix. The yard and warehouse dates back to 1900 and has been owned by Port Elizabeth’s Cicognini family, of Italian heritage, since the 1980s.

The complex was originally the Mosenthal wool washing store with the river itself having been the source of washing water dating back to the mid-1800s.

Businessman Dante Cicognini says “Chicky” was his late father Remo Cicognini’s nickname. “We restored the building seven years ago because the valley is a beautiful natural area. We felt it should not be limited to industrial use, but that we should find a way to integrate it into the urban lifestyle,” Cicognini says. 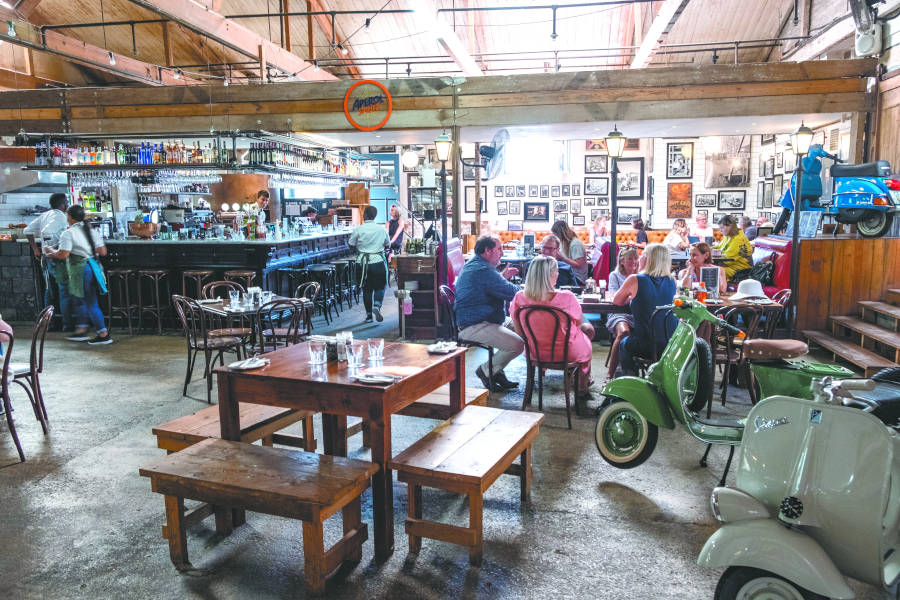 “Our principle wasn’t to create another commercial centre but rather a multipurpose centre around an industries community, with artisans producing and selling goods. We did nothing to alter the building’s historical nature, and worked closely with RC Construction, once owned by the late Remo Cicognini; Niel Basson from Strukt Architects; Steven Carte (aka graffiti artist Jofff); and we’re lucky to have a brave and creative anchor tenant like Werk_.” 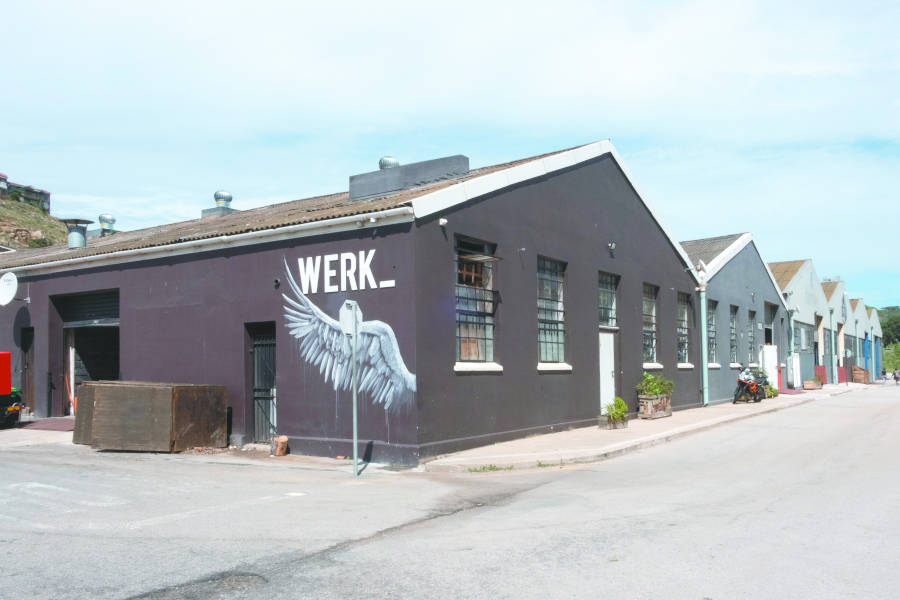 Chicky’s Yard also has a rustic lettable venue for food truck events, music performances and markets. “All the people we worked with to develop the valley are our tenants and we have a What’sApp group called the Valley Family. It’s a close community and everyone loves being here; it just feels special,” Cicognini says.

The family also owns a block in Horton Street and is working with Werk_ on another creative industrial space. 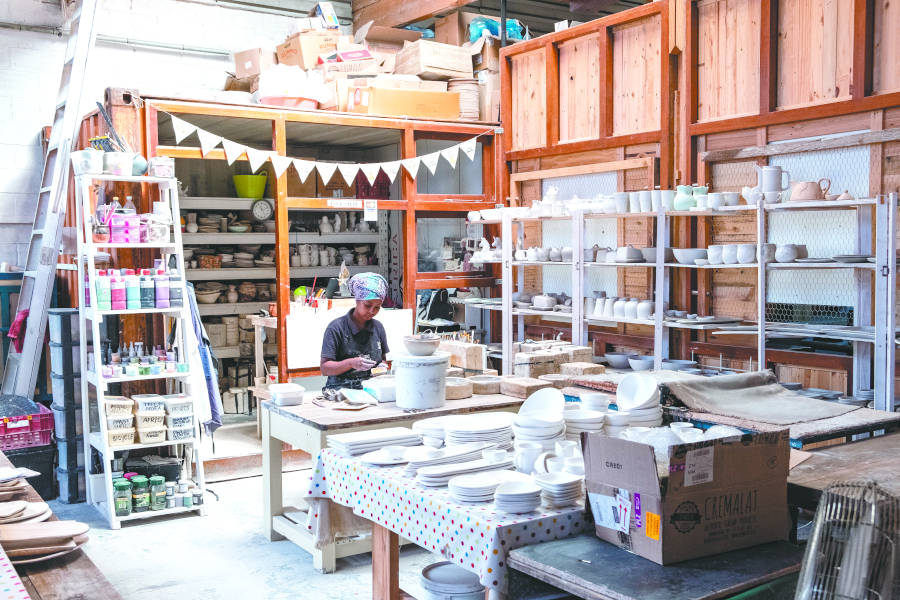 The 116-year-old Tramways building at the corner of Lower Valley Road and Baakens Street was completely refurbished by a specialist team from 2014 to 2016 as part of the development of a new inner-city precinct that will link the harbour and Baakens River area.

Originally a tram station, then a bus terminus and later an ice rink, the Tramways was largely in ruins when the Mandela Bay Development Agency (MBDA) earmarked it for development in 2008. 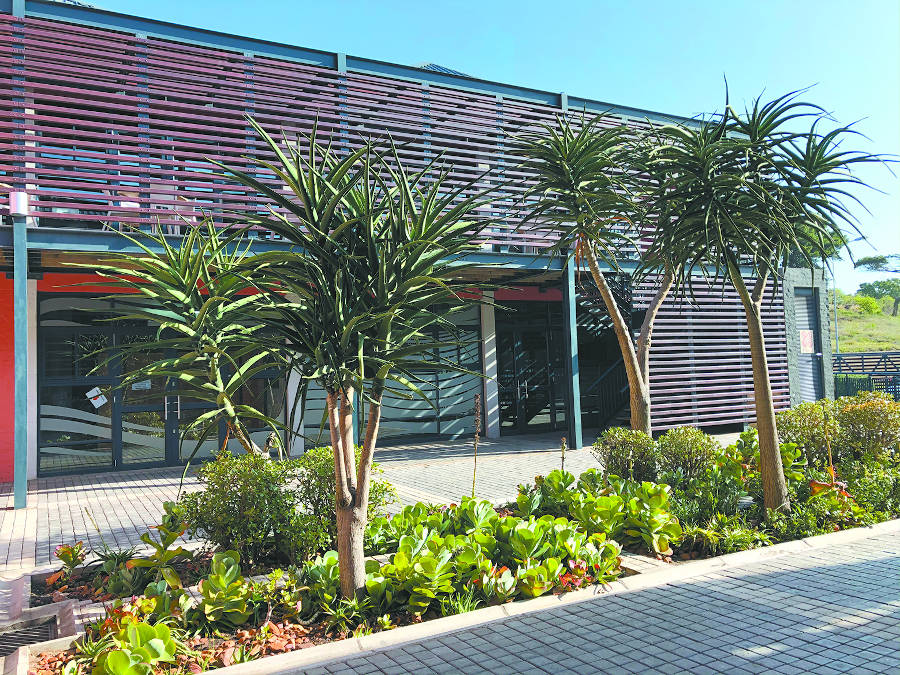 MBDA spokesperson Luvuyo Bangazi says the building now features a mixture of tourism, leisure, entertainment and office space, as well as being the MBDA’s head office. The Tramways also hosts the Wilderness Foundation Africa’s hospitality and nature development programme for the youth.

“The plan was always to design and repurpose this facility into a multipurpose centre that could accommodate events, expos, shows, concerts, product launches, life celebrations, and so much more,” Bangazi says. “Two large halls that once housed off-duty tramways coaches were restored to their original design before modern amenities were added. These halls are used for conferences, exhibitions and workshops.”

The investment of more than R50m went beyond restoration and repurposing of the building itself, Bangazi says. “A significant portion was spent on environmental improvement of the area as a catalyst for private-sector investment. The fruits of that investment can be seen upstream with several private properties undergoing transformation from dirty and oily operations to trendy restaurants, maker spaces, creative hubs, and light adventure tourism.” 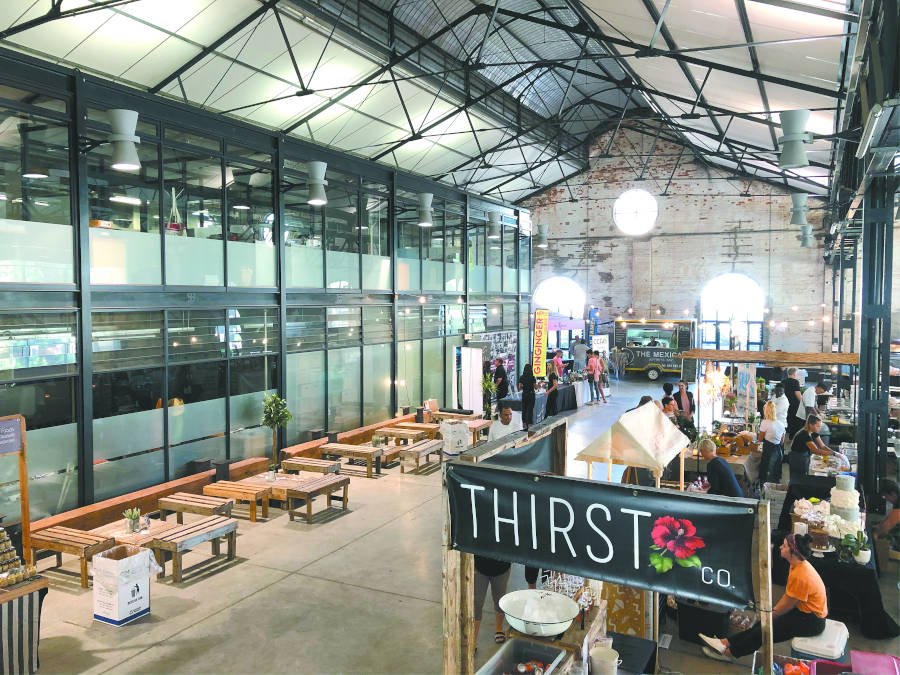 A pedestrian bridge built with ground-breaking composites was launched in November last year, connecting the northern side of the river to Lower Valley Road. “The Baakens Unity Bridge will facilitate access to the valley for big events and gatherings, and is a much-needed crossway for visitors, tourists and the workforce migrating from the CBD to South End and Walmer. The transformation of the lower Baakens was always meant to complement the redevelopment of the mooted Portside waterfront.”

Since opening to trade in 2016, the Tramways has hosted more than 200 bespoke events and welcomed over 100,000 visitors to various markets, launches and exhibitions, Bangazi says. 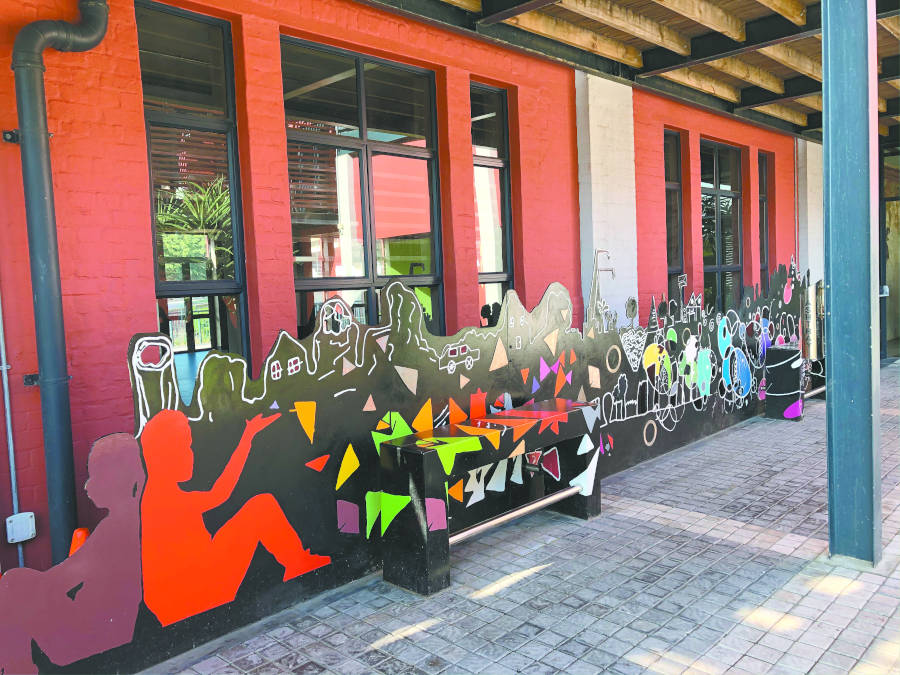 The first erfs were demarcated in 1854, and the terraced houses were built over time until the early 1880s. Many were owned by the late Dr Nick Wolff, then acquired in 1998/1999 by Irishman Ken Denton.

Denton, of Ummi Properties, initiated renovations in earnest in about 2012, a project of several years. He has also invested heavily elsewhere in historic Central. His vision for the houses to become a hub of creative activity has largely been realised in the form of the Donkin Village Creative Quarter, says Simon Le Gras, who co-owns three businesses in and around the quarter.

The houses are mainly occupied by businesses in the creative, media, design, advertising and communications industries.

Le Gras was one of the first to move his businesses here five years ago. “Central is truly one of the prettiest suburbs of Port Elizabeth. That’s why I own property here and also run my businesses (ad agency SimonSAYS, Perfect Circle Design and Haystack Digital) from here,” he says.

Le Gras says Denton sought creative people as collaborators for the quarter with a larger vision for Central in mind. The quarter, overseen by property managers Gimco, also has a coffee shop called the Heritage Cafe.

Photographer Karl Schoemaker is a long-time Donkin Street tenant, while Brian and Taryn Hayward founded digital marketing agency Good News Lab here in 2016. “Our offices are located in a beautifully restored unit along historic Donkin Row, across from the Donkin Reserve, with access from Donkin Street and Constitution Hill,” Brian says.

“Balconies on both sides boast stunning views, and a combination of wooden floors, high ceilings, sash windows and faux fireplaces – complemented by mod-cons like LED lighting, a black-and-white tiled bathroom and air-con – make for a pleasant working environment. “There’s private security along Constitution Hill and around the Donkin Village quarter, which helps all the businesses here feel safer.”

Brian sees the location as a mix between Cape Town’s De Waterkant and Bokaap. “The beauty around us – cityscapes and sea views – is breathtaking and inspiring, and that’s what we need as a creatively-orientated business.” 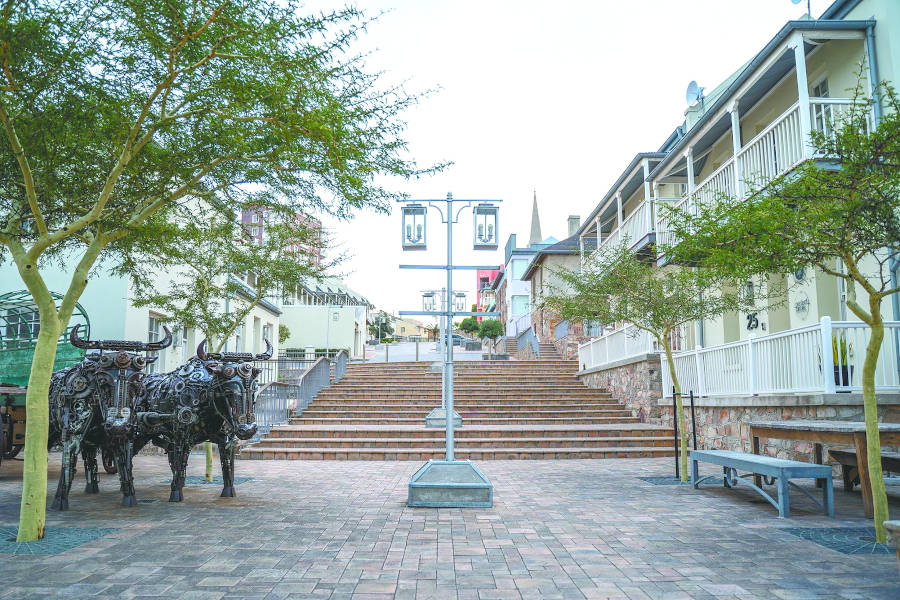