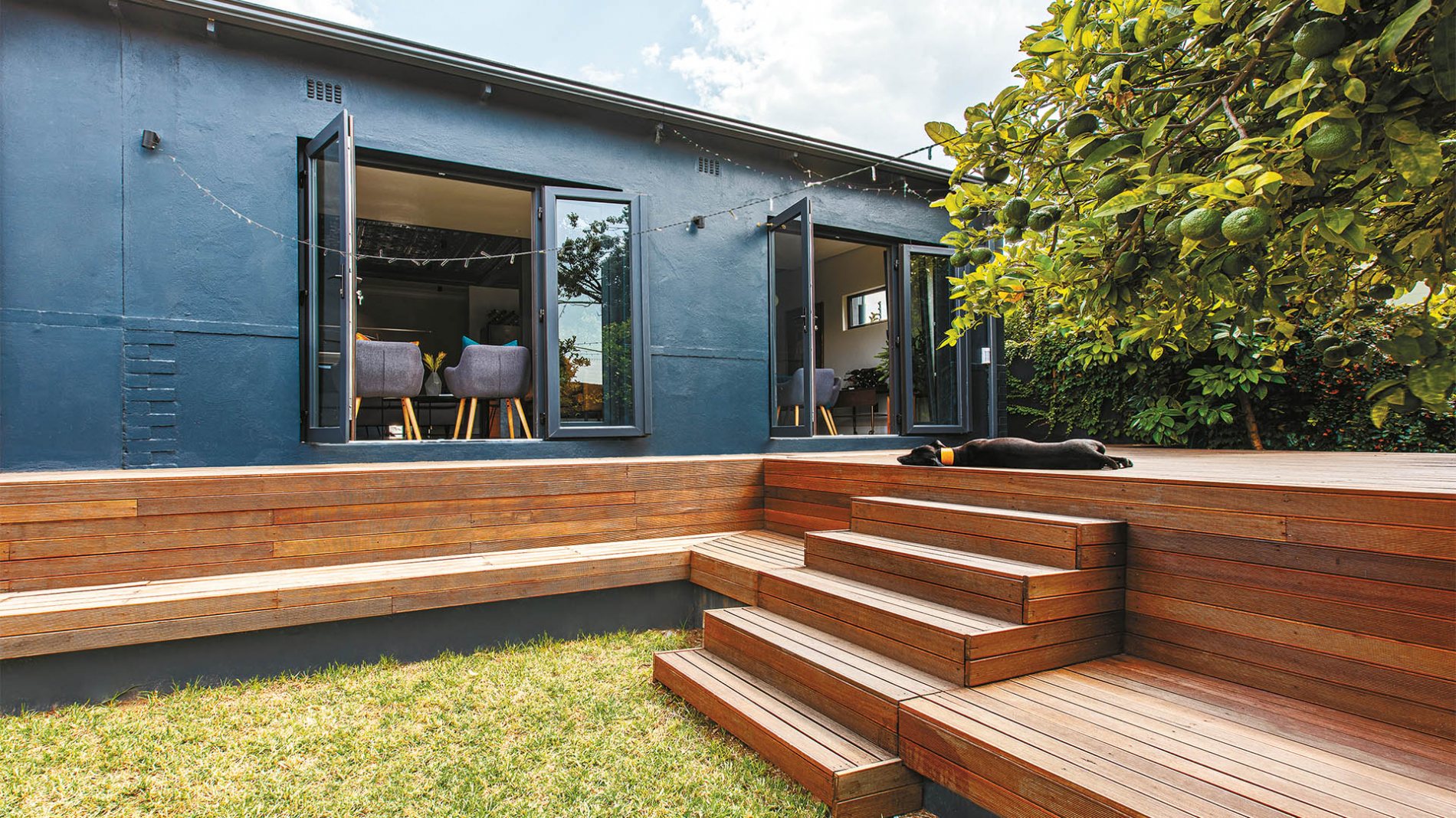 Renovation is never easy, especially when managing the project yourself. Alet Verster, however, successfully transformed her poky Parkhurst house into a light and airy entertainer’s dream over four months

Bustling and vibrant, Parkhurst is one of Johannesburg’s most sought-after neighbourhoods; the perfect location for Alet Verster and Sebastian Chatov’s new home. However, the house was less so. Owned by the same family for decades, it was badly in need of updating, with old fittings and peeling paint. Luckily, its original timber flooring and pressed tin ceilings hinted at its potential.

As owner of interior and architectural studio Patsy and French, Alet took on the renovation of the 210m2 two-bedroom home, handling both the design and architecture and managing the project on site. The result pays tribute to the heritage of the home through gentle restoration of its original features, while transforming it into a space that suits their lifestyle perfectly. “There’s a fine balance between retaining all original features and turning an old house into a home congruent with the way we live today,” says Alet. “I believe in playing with the contrast between old and new, instead of trying to match the original. That way you honour the past while bringing in the current lifestyle.” 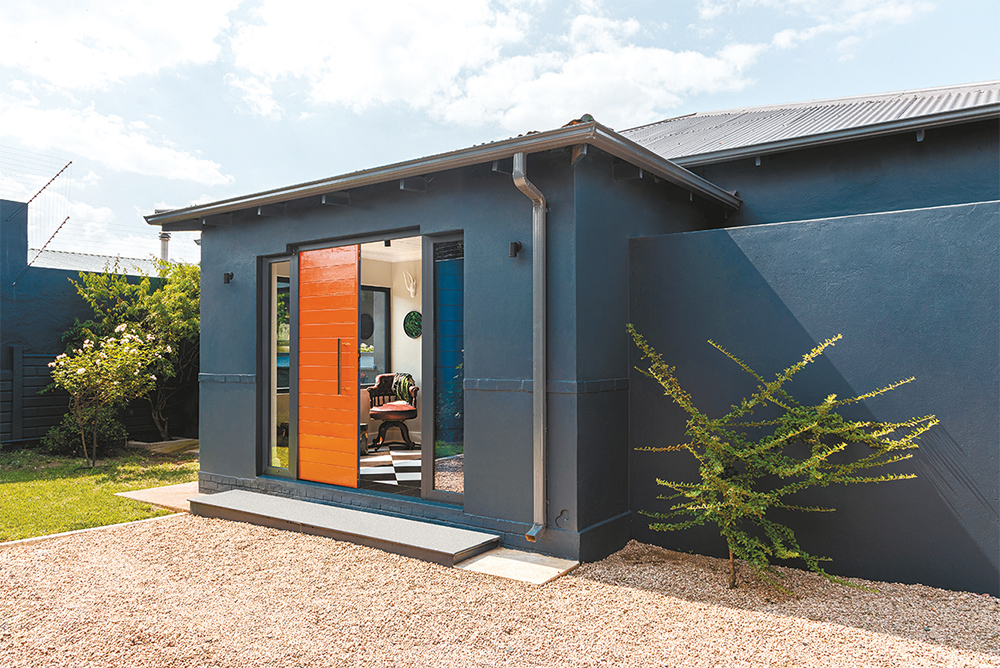 There were plenty of surprises along the way. “The house was from the 1930s and so was the electricity and the plumbing. We had to gut all of that and rewire and re-plumb – it was my first encounter with a 1930s geyser!” says Alet. “On the lighter side, we also discovered some interesting items from the previous family who had lived there for two generations, including where they had marked their kids’ heights growing up, a graduation photo from the ’80s, some antique weights, and a (broken) air rifle!”

Let there be light

The now three-bedroom family home is modern, light-filled and perfect for entertaining, with a central open-plan living, dining and kitchen area that flows easily out into the deck and garden through folding doors. “The house started off with lots of small rooms – there was even one in the centre of the house, without any windows,” says Alet.

To achieve the spacious new look, they gutted five internal walls and converted an old bedroom, study, scullery and kitchen into the now open-plan kitchen and living area, as well as opening up the dark corridor leading to those spaces. “We wanted to retain the progression of space from the entrance to the living area, so we kept parts of walls to frame each room while preserving the visual links.”

While Alet’s husband Sebastian was at first wary of an open-plan kitchen, he soon came around to the idea. “We drew inspiration from a farmhouse I designed for my parents with a generous open plan,” says Alet. “My husband was initially not that fond of an open-plan kitchen, but the more we started going to their country house, the more all of us could appreciate how lovely it is to cook and have a glass of wine while others sit around and chat, and the messier side is moved to a scullery.” 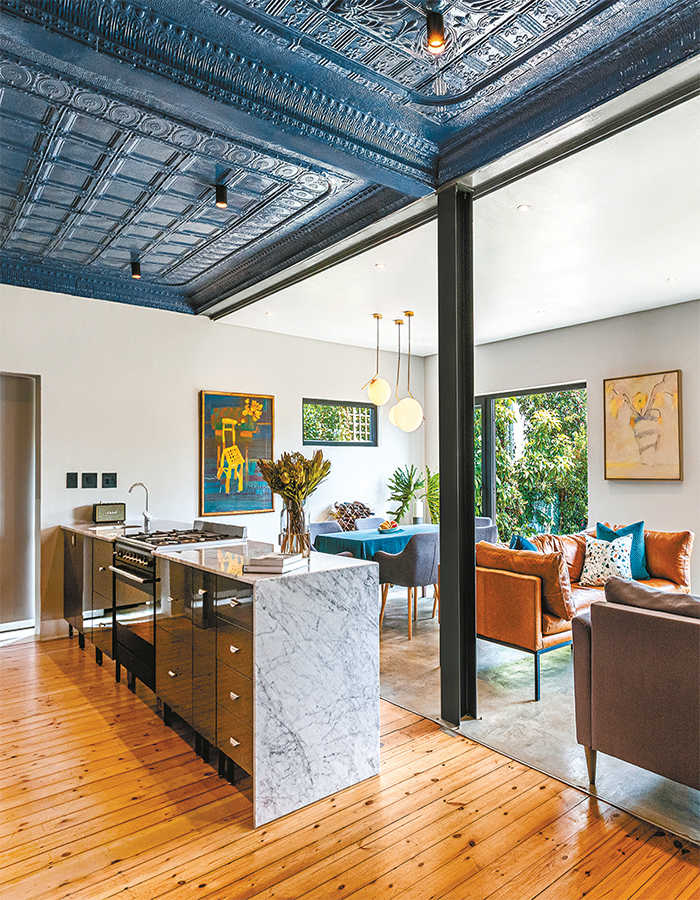 With a little help from their friends, the couple installed all the joinery themselves, which allowed them to splash out on some special features, such as the brass pendants lights and Carrara marble kitchen countertop that wraps all around the one side. “In combination, they lend an air of old-world glamour to the contemporary renovation,” says Alet. She and Sebastian also had to find a way to blend their different personal styles – Alet loves light spaces, bright colours and minimal detail, while Sebastian prefers dark, dramatic areas filled with antiques.

Through negotiation, compromise (and a shared Pinterest board) the resulting home is filled with bright colours and vintage finds. “We found some gorgeous mid-century and Art Deco pieces at a second-hand furniture store in Heidelberg, which ended up suiting the house to a tee. We jokingly call our combined style Recessionism.”

Handling the renovation process yourself brings numerous challenges, says Alet. “It’s the stuff nervous breakdowns are made of! Organising all the tradesmen, orders and deliveries for materials, all while running my own architecture and interior design practice… The idea was to make the budget go further, but, after all the surprises, I feel next time I’ll be getting one of my professional contractors in, while I stick to my part as the designer – it’s also much more satisfying!” However, in the end it does bring its own joys. “As with any renovation, the most rewarding thing must be reshaping a tired, neglected space into a bright home for your family. We feel we created a cosy space for ourselves and we love spending time at home.”

1 Make sure you have a clear vision before you start. The chaos of building work brings up enough uncertainty, without having to make snap decisions about important features which you might end up regretting.

2 Get reputable contractors on board. Ask around, speak to friends who have built before, read reviews and visit building projects to make sure the contractors’ experience is of a similar scale to your renovation. Contractors who are out of their depth can end up costing you much more than you planned for. And if their price sounds too good to be true, it probably is.

3 Even on a tight budget, choose a few items you want to splurge on, like a freestanding bath or marble countertops. Don’t underestimate the joy this will bring you every time you see it, even if the renovation exhausts your budget.

4 Whatever you think you’ll be spending on the renovation, add 40% to that number. With renovations there are always surprises, like finding out that all the water pipes must be replaced, or having to underpin a sagging foundation.