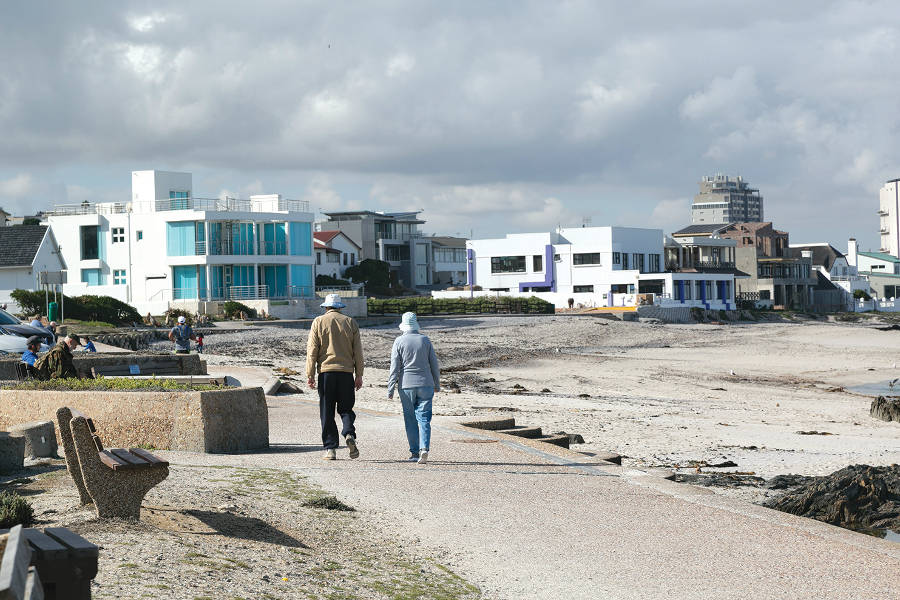 Bloubergstrand is the historic heart of the greater Blouberg area. Once a small rural ﬁshing village with fabulous views over Table Bay – its beaches edged by rock pools at the north end of Blouberg beach now a favourite of the bucket and spade brigade – it still feels slightly separate from the new developments and modern suburbs that now connect it to the metropole.

Residents are proud of its long history and the village community feel that still exists. “Despite all the developments around Bloubergstrand village, it’s still tranquil and the most magical place on earth,” says resident Alan Zondagh. “The sea, the beaches, the view of Table Mountain, the surf spots, the pools on the rocks – John-Louw-se-pool left of Small Bay, and Kitti’s Pool on the Island.” 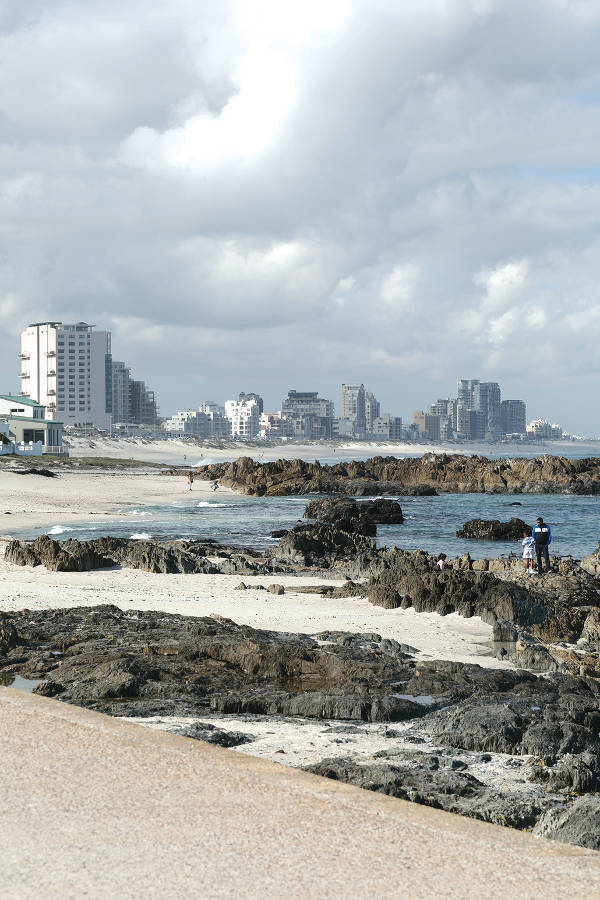 Bloubergstrand itself has a sprinkling of historic houses dating back to the 19th century, the oldest now home to Ons Huisie restaurant. Twentieth century beach villas and family homes make up the rest of the village property. In the dunes behind and stretching to the Big Bay area are several new secure estates and local shopping centres, as well as the big new Table Bay Mall conveniently close.

“With all the new developments over the years we now have everything on our doorstep and within 5km, including shops, banks, restaurants, doctors, dentists, and medical centres. We’re spoiled for choice,” says Alan.

The length of the Blouberg beachfront is a mix of high- and low-rise apartment buildings and complexes, making the most of the ocean views and the demand for holiday accommodation, especially by international kitesurfers.

Between them the Western Seaboard suburbs have a wide choice of schools, most of which are the other side of the R27 from Blouberg, but still within easy reach. Well-known private schools include Elkanah House, Parklands College, CBC St Johns Parklands, and many more options such as Blouberg International, Big Bay Academy, Shelanti, Generation Schools, and recently opened Rallim Preparatory. 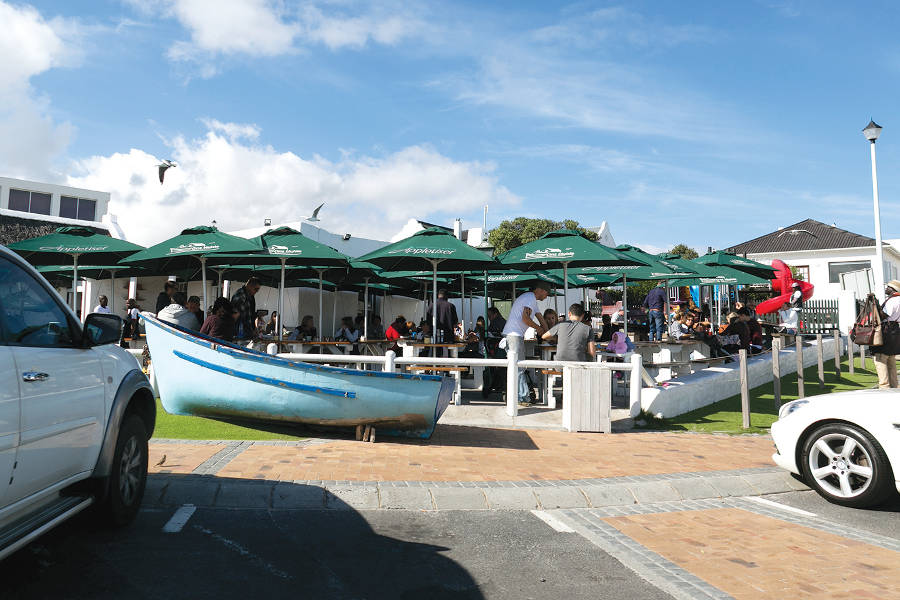 Locals love hanging out at Small Bay beach and Windell Park for a sundowner on a beautiful day, sheltered against the southeaster, says resident Santie Coetzee. “I raised my boys on the beach of Small Bay and have witnessed the cyclical erosion and accretion of the beach and dunes.”

She also enjoys having a beer and a crispy butter-based pizza on the lawn of the Blue Peter Hotel, “or a Weskus mussel pot on the stoep of the historical Ons Huisie restaurant, where you’ll deﬁnitely be able to catch up with a few locals”.

Alan, his brother George, and Harold Larsen started the Big Bay Surf Lifesaving Club more than 30 years ago. “It’s great to see it’s a thriving club with so many young boys and girls taking part in lifesaving,” he says.

Other favourite things to do include “surﬁng, swimming, rowing in the sea and walking down the coast, eating breakfast at Café Blouberg, listening to live music at the Blue Peter”.

Then, of course, any time the wind blows there is kitesurﬁng, with international competitions taking place here, surﬁng and SUP all with those fantastic views of Table Mountain and Robben Island as a backdrop.

“My favourite thing is being able to see the whole of Table Bay from my windows, to watch the arrival and departure of sea vessels, and to see the rain rolling across the sea like a white squall until it hits my windows in a spray of blur.” SANTIE COETZEE, RESIDENT 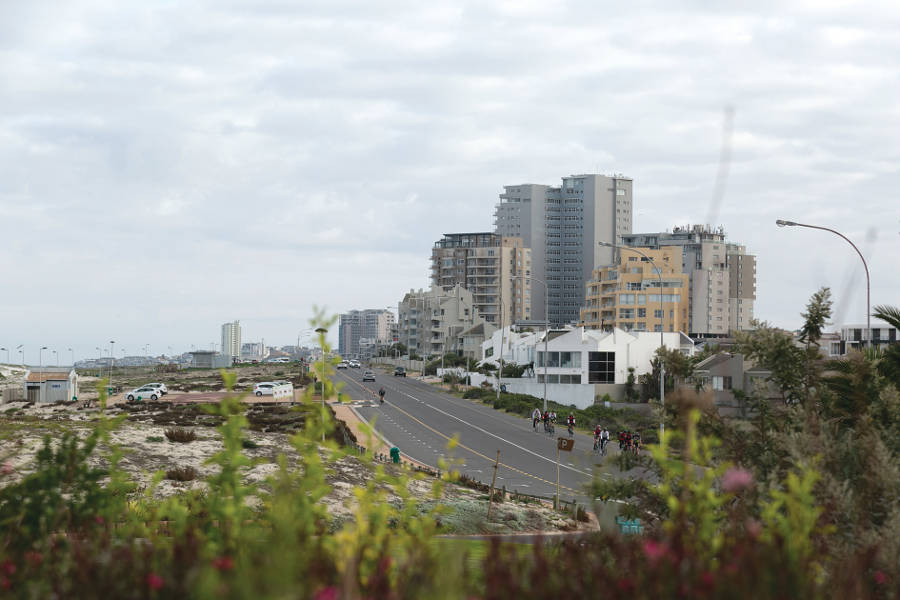 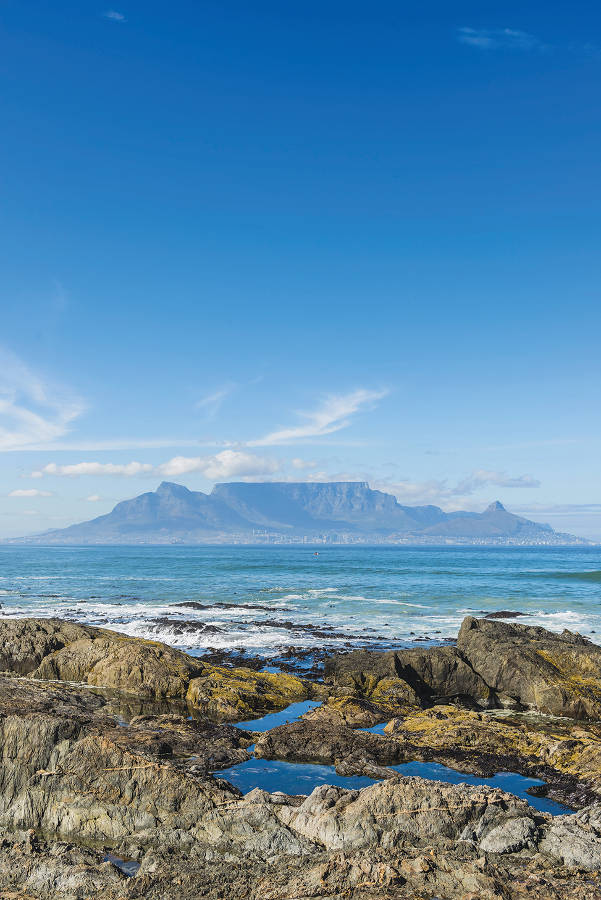 Bloubergstrand is steeped in history dating back to 1806, but today residents love it for its easy seaside living. Eat fish-and-chips at Ons Huisie, go to On The Rocks for a more formal dining experience, and don’t forget the Blue Peter Hotel for sundowners on the lawn. Known as the Clifton of the West Coast, Bloubergstrand offers unequalled views of the iconic Table Mountain and Atlantic Ocean. Community driven initiatives for both Blouberg Village and Extension 1, provide a 24-hour, dedicated security patrol service.
Caron Leslie, broker owner 082 416 6395 | caron@remaxpa.co.za

Take long walks on the sandy stretches of beach all the way to Melkbosstrand, and marvel at the ease with which kitesurfers do mega loops. Hang out with the locals at Small Bay beach and Windell Park, which provide shelter against the South Easter. Small Bay waters also have ample harders (mullet) and sometimes you can buy a few from the local fishermen. Here people still greet one another, they will let you know when your garage door is left open, and our private patrol service will go beyond the call of duty.
Lizzy Botha, area specialist 083 300 0093 | lizzy.botha@pamgolding.co.za

Not only is Bloubergstrand one of the best kitesurfing destinations in the world, it also boasts sought-after private schools, beautiful beaches, a variety of shopping malls, and views of Table Mountain and Robben Island that are just priceless. It’s the best alternative to the pricey Atlantic Seaboard, as an apartment in walking distance from the beach can still be purchased for under R2m. Surrounding areas offer secure estate living and free-standing homes – the variety is extensive and caters to all buyers’ needs.
Kerry Weaver, property consultant 082 312 7713 | kerry.weaver@leapfrog.co.za