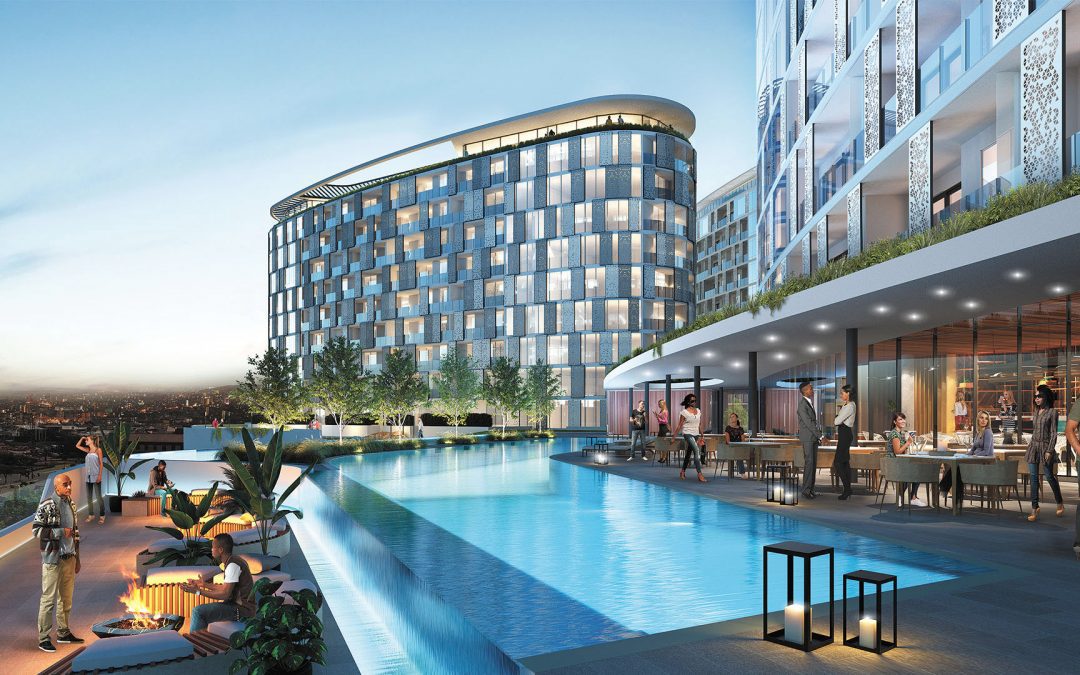 Sandton, South Africa’s commercial hub, may be hard hit by the pandemic, but developers, landlords, brokers and tenants are working together to not just revive business here, but also transform traditional ideas around the office space. And they are not alone in their quest. “Adept investors are ahead of the curve,” says Simon Wilkins, head of Global Corporate Services, Galetti Corporate Real Estate. “Rather than taking the conservative approach, they recognise the imminent return to work will not be the same.”

And ‘different’ doesn’t mean employees should be concerned. Wilkins says future office spaces will promote safety, fun and collaboration as many employers entice their staff to return to work. “Landlords are working just as hard to differentiate themselves and this makes it interesting and competitive. Be it through incentives, amenities or location.”

Mixed-use developments – a combination of retail, residential and commercial all in one building – and co working spaces – continue to lead the way as the industry pivots to meet this demand. “During lockdown, many people chose to forgo their inner city homes and move to the suburbs or outlying areas, but now we’re bringing them back through several game changing developments that combine work and play,” says Wilkins.

DEVELOPMENTS ON THE RISE

Waterfall City, where people can connect every aspect of their lives – play, work and stay – became home to some of the country’s largest multinationals in terms of commercial properties before the pandemic. Several residential developments have been popping up everywhere as well. In the past year alone, listed property giant Attacq completed 22,000m2 of development in the area and they now have their sights set on even greater goals – 50,000m2 of additional development plans were recently approved.

“This follows the news that Attacq sold a whopping 20% stake in MAS Real Estate earlier this year,” says Wilkins. “It’s clear that Attacq are now hedging their bets on Waterfall as a sought after location. Interestingly, a key component of this investment comprises office space with company citing demand from tenants looking to consolidate their premises between Johannesburg and Pretoria.” 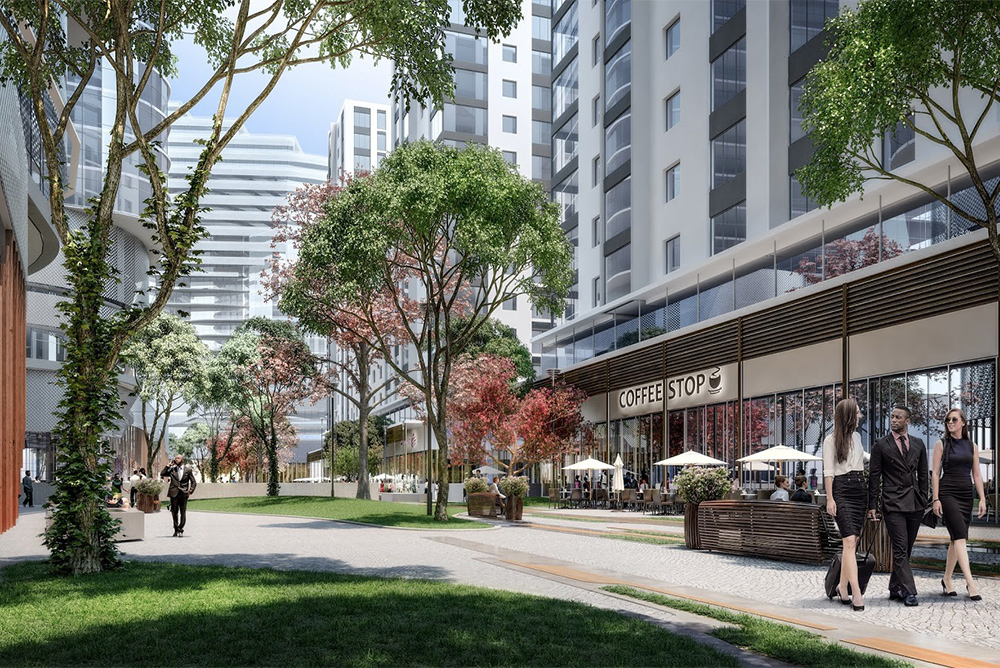 Harbour Arch, currently in development in the Cape Town Foreshore

Harbour Arch – Developed by Amdec, the same developers behind the iconic Melrose Arch, Harbour Arch is Cape Town CBD’s first large-scale mixed use developments precinct. On completion, the 5,8ha development will be home to six individual tower blocks with a total 200,000m≤ of usable space, located in the Foreshore at the junction of the N1 and N2 highways. “With Harbour Arch set to offer the largest selection of residential apartments in the Cape Town CBD, this location is perfectly primed for residents to take advantage of the high grade office space right on their doorstep,” says Wilkins.

Despite its proximity to Cape Town’s most valuable commercial property, the Foreshore has long been an area characterised by missed opportunity and neglect. Harbour Arch promises to bring working professionals back to the inner city, which is great news for both commercial landlords and business owners, Wilkins says. 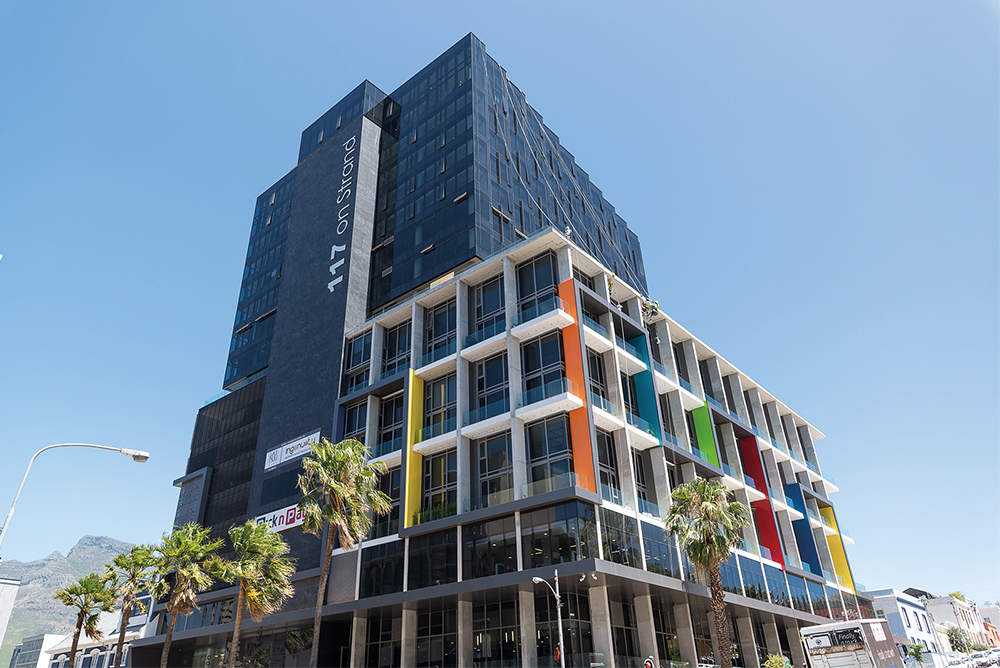 117 on Strand – Cape Town’s CBD is a hot spot for visionary developers, with the 117 on Strand mixed use development also perfectly positioned to bring some much-needed invigorating energy to the inner city. Situated on the boundary of De Waterkant and Green Point, the building offers a trendy combination of retail space (5,200m≤) and residential apartments as well as 5,500m≤ of premium grade office space. “With office space, coffee shops, a Pick ‘n Pay and Planet Fitness on site, residents don’t need to leave the building to grab coffee, go to the office, pick up groceries or work out,” says Wilkins.

JSE-listed developers Ingenuity Property Investments chose the 117 on Strand site strategically, as it falls within Cape Town’s Urban Development Zone. “This means buyers qualify for tax advantages by purchasing property here, which is a significant drawcard for investors.”

The Terrace at Sandton Gate is looking to ‘blend the very best of urban and suburban lifestyles’. Developers struck a perfect balance between urban convenience and the tranquillity of nature – the development is just five minutes away from South Africa’s financial hub, Sandton, and overlooks Braamfontein Spruit, one of the city’s longest natural greenbelts. “Johannesburg’s most prestigious suburbs really lacks a mixed-use developments precinct, such as the one offered by Sandton Gate, as there are very few residential areas where shops, gyms, restaurants and even the office are within walking distance,” says Wilkins. 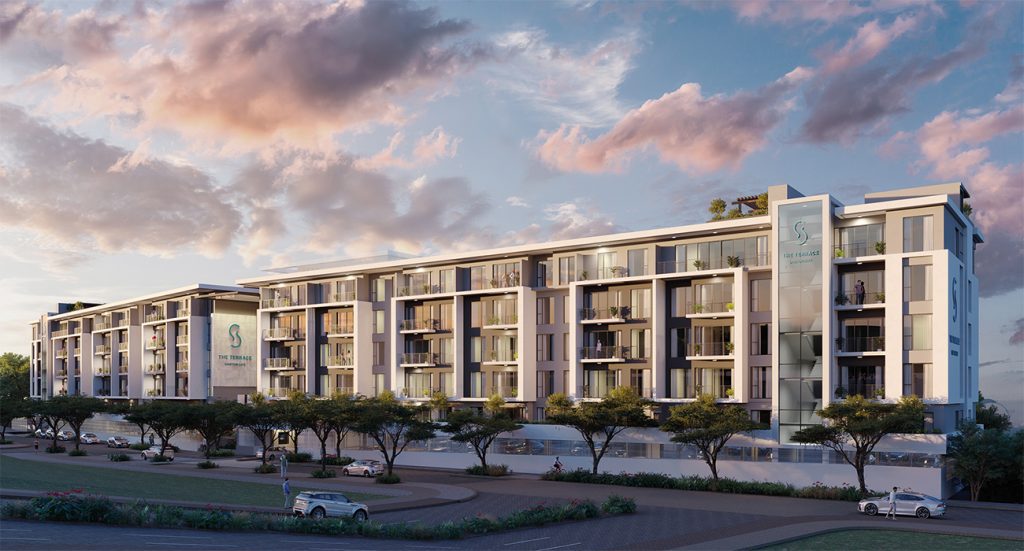 The Terrace is part of the Sandton Gate development

“However, Sandton Gate precinct offers a gym, restaurants, shops, beauty salons and P-grade office suites in addition to their luxury residential apartments. Growthpoint recently cited properties nearest the Gautrain station as their big ticket draw-cards and we’re set to see a lot of exciting mix-use developments in this area.”

Saxon Square – With Rosebank fast becoming Johannesburg’s most sought-after address, it’s no wonder that the developers behind Saxon Square chose Oxford Road as the location of their new mixed use development. Taking into account the way younger generations are living and working, the development prioritises community by offering a rooftop cinema, residents café and co working spaces on-site.

“While the other developments discussed here offer traditional office space within the building or in the precinct, we anticipate seeing many newer developments that offer co working spaces inside the building as a way to attract millennial and Gen Z residents,” says Wilkins.

This marriage of residential and commercial property in mixed use developments may be the best chance that the commercial property sector has at recouping its losses and reclaiming its strength. “The industry has had a tough last two years, but it’s time to respond with creativity rather than by relying on the old formula,” says Wilkins. “Innovative reimagining of commercial property will separate the winners from the losers in this round.”